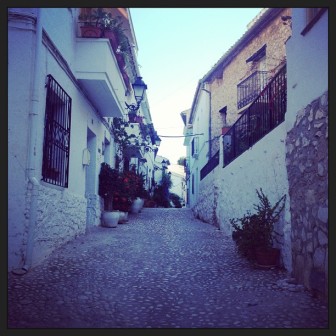 I woke up to the shine beating in the window. It was hot and the morning had just begun. I made my way down the terra-cotta stairs to four students curled up, still in dream land. They are tired. They have explored and soaked in so much culture and experience that though they want to be awake for hours can not help but fall asleep the instant their heads hit their pillows and slumber until they are forced to wake up by an outside source. Soon noises filled the downstairs. Their voices went from  being slurred and half awake to loud and boisterous as they laughed about the previous days events. We laugh a lot in our house. (They have not yet fallen in love with my jokes, but I’m working on it!)

One by one they left to go experience Spanish church culture for the first time. All of the students were divided into three groups, each going to a different church. Three of the students from my house had to take a train nearly an hour away to go to their church. As each group left the house became quiet and I got some much needed fully alone time. I breathed in deep, taking a look around my room and once again being struck by my view. The water never ceases to amaze me. It is as though the sea were made to be a patchwork quilt with all shades of blue. There are patches of blue, turquoise, aqua-marine, sky blue and a deep sea blue. They move in a continuous and rhythmic motion as though they look up to a sovereign conductor, who directs the sea as though it were a choir singing in 8 part harmony all in the rhyme. I love it. I’m moved by it. My soul sings to it.

I decided to do laundry, a simple task that at home is one of my least favorite things to do. But here, for some reason, the simplicity of the laundry is one of my favorite things. I love the smell of the fabric softener as I hang each item on the line. I smiled once again as if I were a character in a play. I then made a breakfast of caramelized onions and eggs and savored the flavor as I enjoyed the silence of my home.

I could not wait to spend some time with Jesus. Though I’m here on a trip to walk with college students in their own spiritual formation, I have felt a strange distance between me and Jesus. It feels like the kind of distance one experiences when they live in a different place from their best friend. Though they know their friend is there and close and the relationship is in tact and secure, there is just a missing from being separate from their loved one.

I needed to be with Him.

I took time to write, to listen, to pray, to cry. My heart is much like the sea, a patchwork of colors of experiences, thoughts, new ideas, old habits, memories, hopes, dreams and questions. And they all flow in motion as they look to their conductor. But let me tell you, if even just one of the patches doesn’t submit to the direction of the great conductor, the rhythm is off for each part. Today, I wanted to once again submit to the direction of my conductor. One by one I laid my thoughts, experiences, memories and the like to His care and peace swept over me.

The peace was rich and good and it rocked me to sleep. I woke up to the sound of people coming home from their church excursions. We talked a bit, did our separate work and eventually the last group came home. The three of them; Claire, Brianne and Donald came upstairs and we chatted about our days and made a plan to go to the sea shore.

We walked down the street to the shore and laughed and listened and played. Once on the shore, we made a plan to swim out to the rock bar which rests a little over 100 yards away. We laid down our towels on the rocks. (Yes, rocks, not sand. The beaches in Altea have rock that is much like river rock covering their banks. Not the most comfortable, but for today it did its job.) I laid and cared for our belongings as they swam out to the bar and back, then I made the swim myself. It was good to be in the water.

I swam back to shore. It was a more difficult swim than the swim out. The tide kept pulling me back and I kept pressing forward against its pull. Soon on the shore I laid covered by the sun, until shadows washed over us.

We stepped in our home and each have rested from a long walk and long swim.

I once again sit in my room, looking out at the sea, which is now a very light grey blue color, and am calm. I know my Jesus is with me. There is still much to say and hear from Him, but I am thankful for a day to be. A day to be with my Jesus and to be with these students who remind me of him.

The Things I See

Today these prayers and scripture and invitation, which were written weeks ago, seem fitting. Grateful for a global community desiring to see goodness and beauty in the midst of dark and hopeful backdrops. #Repost @commonprayersduringpandemic ・・・ As another day begins, be full of hope for the Lord is with you and He is for you. He is mighty to save.

If you don't find Cari connecting with a new friend, an old friend or a soon to be friend, you might find her redecorating her home, gathering people around tables, exploring, creating, reading the book of John or reading the story of a hero whose life has inspired her to live a good story herself. Read more about Cari on her About page.